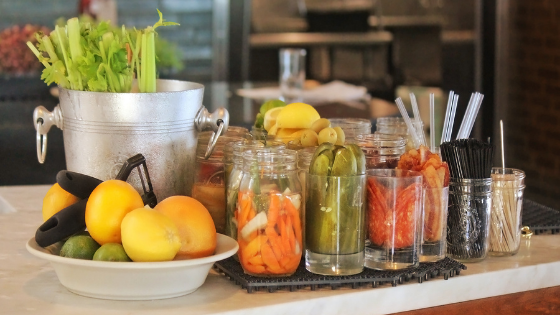 Is there anything more frustrating than seeing an amazing cocktail recipe you want to try right away but then realizing that you’re missing one or two essentials? Sure, you could try to tweak it with ingredients you do have, but it’s never the same.

We’ve all been there, and that’s why a DIY bartender’s best friend is a well-stocked bar. That doesn’t just mean building up a stash of liquors and mixers, though. The right garnish can make or break a cocktail, so the most common ones should always be kept handy.

The next time you’re making your grocery list, add these must-have garnishes.

Martinis are as classic of a cocktail as you’ll find anywhere, and olives are a cornerstone of the dirty martini that should be in every bartender’s portfolio.

Maraschino cherries are downright delicious, so it’s no wonder why they’ve become such popular garnishes. You’ll need them for old-fashioneds, Manhattans, and so on. Cherries are particularly common for whiskey cocktails, so between Maraschino cherries and some Evan Williams Single Barrel whiskey, you have the start of a delicious drink.

Limes may be the most versatile and widely used of all cocktail garnishes. They top off a margarita, gin and tonic, rum and Coke, Moscow mule, and so on. You could use a lime wedge to top a Deep Eddy vodka soda, or even just a Corona if it’s more of a beer type of night.

The lemon twist is a cocktail garnish that’s growing more and more popular, for instance in some martinis. It’s better to keep the full lemons in your stash rather than making the twists ahead of time. Not only could the twists dry out, but you want the lemons around anyway because lemon juice is such a common mixer.

You might be surprised how many cocktails use rosemary as a refreshing, beautiful garnish. Try it in a vodka gimlet for example, especially during the spring or summer when you’re feeling earthy.

Is any margarita complete without a well-applied rim of salt? We think not. Alongside Hotel California Tequila Blanco, it will set you up for the perfect margarita.

Who doesn’t love cinnamon? Cinnamon sticks are delicious garnishes, especially for sweet cocktails. They’re particularly frequent flyers in Christmas-themed drinks, so at a minimum, be sure to stock up before the winter holidays roll around.

The fact that mint has such a light, refreshing flavor makes it one of the greatest garnishes out there. It’s a staple for mint juleps, Moscow mules, the great El Encanto Silver Rum mojito, and so many other favorites.

Other than a few signature rarities, the bloody mary is probably the only cocktail you’ll be making with a celery garnish. Still, if you’re a bloody mary fan, your cocktail isn’t complete without it.

If you enjoy a great martini, the natural next step is to try your hand with a Gibson. It’s very similar to a martini, with most of the same ingredients like Sȏng Cái Vietnam Dry Gin, but with cocktail onions as the garnish.

A cucumber wheel is a perfectly classy garnish for a wide range of cocktails. Try it on your next gin gimlet, for example, and taste that nice crisp flavor.

Certain garnishes have become true staples in the cocktail world, and for good reason. To outfit your bar to handle any cocktail you want to make, keep the garnishes above in stock so they’re ready at a moment’s notice.

If you want to know what liquors and mixers to keep around as well, check out the latest SIP Award winners.