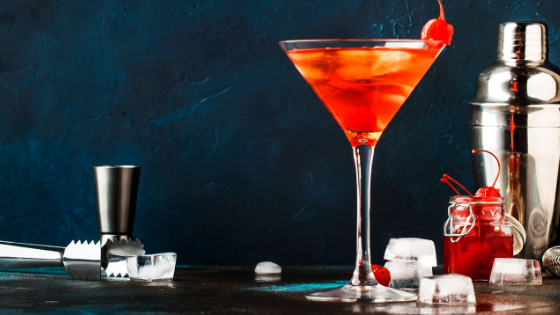 Whiskey. Vermouth. Angostura bitters. Maraschino cherry. If you’re a fan of classic cocktails, you already know that these are the basic ingredients to one of the most long-standing and essential staples in any bartender’s bag of tricks: the Manhattan.

When you sip that sweet and boozy treat, do you ever wonder where it started and who first tossed those ingredients together in a glass? If so, today’s your lucky day. Let’s take a look at the history of the Manhattan cocktail and how it’s evolved over the years.

Where Did the Manhattan Cocktail Begin?

The Manhattan is an incredibly old cocktail recipe, believed to have started around the 1860s or 1870s. The good news is that this means it has withstood the test of time. The bad news is that record-keeping in these years was sketchy at best, so the details of the Manhattan’s origins are murky.

The most widely repeated story is that the cocktail was invented at The Manhattan Club in New York City by Dr. Iain Marshall. He created the recipe as a signature drink for a banquet hosted by Winston Churchill’s mother in support of a presidential candidate at the time. It became known as The Manhattan because of the club where it was born.

Of course, as most legends do, this story has been called into question because there are indications that Churchill’s mother was in either France or England at this time. Another story that has arisen with more apparent credibility is that the cocktail was created by a bartender known only as Black at a bar called on Broadway called The Hoffman House.

How the Manhattan Has Varied Over Time

The Manhattan’s exact origin story might be a mystery, but one part of its history that is much more clear is the way it has evolved and changed over time. It’s one of the staple cocktails that mixologists often tweak to give it their own personal spins.

In its most traditional form, a Manhattan uses American rye whiskey as its backbone along with sweet Vermouth. Throughout history, though, the types of whiskey, vermouth, and even bitters have varied. For example, during Prohibition in the US, most Manhattans used Canadian rye whiskey because it was more easily available.

Bartending books over the years have listed the Manhattan with their own versions of the recipe. Some call for bourbon, others call for dry vermouth instead of sweet vermouth, and still others call for orange bitters. There’s even a recipe from an 1891 bartending book that calls for a dash of absinthe.

Making Your Manhattan the Best It Can Be

When it comes to a Manhattan, its interestingly varied history tells us one thing for certain: this is a drink that everyone can make to their own specifications. Experiment with different spirits, bitters, and syrups until you find that one combination that you’ll keep coming back for time and time again. Whatever you do, make sure you’re only using the best SIP Award-winning spirits. Try JK Williams Stormy River Rye Whiskey or, for a Canadian rye, use Masterson’s Straight Rye Whiskey. If you love a semi-dry vermouth, look no further than Regal Rogue Lively White. For more ideas, check out the top spirits of the SIP Awards.