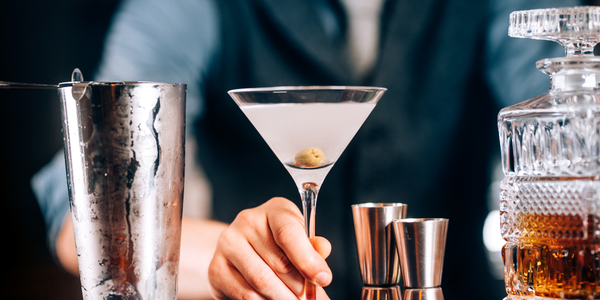 The Martini’s history dates back to the mid- to late 18th Century. Like many classic drinks and spirits, the origins are unclear and debated by historians. This classic grew in popularity by films such as the James Bond franchise.

Who invented the Martini?

Joseph Thomas bartended at the Occidental Hotel in San Francisco. This has led historians to believe that it was first created at this hotel’s bar and potentially consumed by travelers heading toward the city of Martinez.

The city of Martinez claims the cocktail was invented on their grounds. They also believe that the name comes from the “Martinez Special“.

Their official website also explains that a gold miner on route the San Francisco stopped in Martinez for a celebratory drink. The minor loved the Martinez Special so much that he ordered it for the house and took the recipe to San Francisco where he personally guided a barkeep on how to concoct the drink.

The city of San Fransisco and Martinez took their dispute to the courts. San Fransisco’s Court of Historical Review decided that the Martini was first mixed on San Francisco soil. As a result, the decision was overturned by a court in Martinez.

The Martini’s true origin may never be clear, but the legends will live on indefinitely.

The Evolution of The Martini

Created in 1922, this version calls for a 1:2 ratio of London dry gin and dry vermouth. Stirred with ice; aromatics bitters or orange are optional. After that, it is strained into a chilled cocktail glass. The typical garnishing is either a lemon peel or a green olive.

This version calls for dry vermouth, but it has to be white. This particular version became incredibly popular during the Roaring Twenties. In the years to come, the standard amount of vermouth began to decrease. For example, in the 1930s, the Martini was served with three parts gin, and 1 part vermouth; in the 1940s the ratio changed to 4:1. As the decades past, common ratios began to include 6:1, 8:1, 12:1, and 15.1.

Made with a single splash (approximately ⅛ of an ounce) of olive juice or olive brine. This adds a salty layer to the experience. Usually garnished with a “Spanish” olive filled with pimento. Other fillings include bleu cheese or a garlic clove, as well.

For more content like the history of the classic Martini, make sure to read Origin of the Bloody Mary and The Difference Between Shaken and Stirred for more informative content on your favorite kinds of drinks!

Stay up to date on all things SIP Awards by signing up for our newsletter, or reach out to us for questions, partnerships and more: click here!