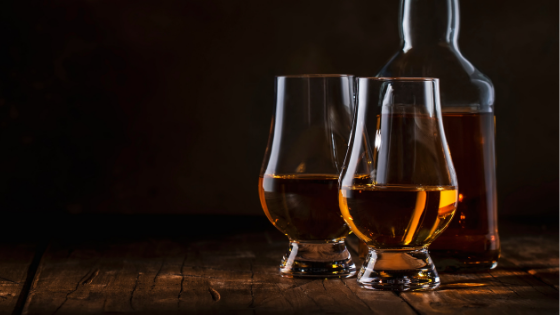 No one is born as a spirit aficionado. There’s a lot to learn about the world of distilled spirits, and until you dig into the details, your local liquor store probably looks like a wall of two categories: brown liquors and clear liquors.

Let’s start by getting into the specifics of three common terms you see often: whiskey, bourbon, and scotch. To a new palate, they taste similar, so what’s the difference?

The Basics of Whiskey

Whiskey is more of a term for a general category of distilled spirits. Bourbon and scotch are both types of whiskeys. You’ll also see Canadian whiskey, Irish whiskey, and so on.

The general definition of whiskey is a distilled spirit that’s made from grain. The grains used could include barley, corn, rye, malt, and more.

Each whiskey has a similar basic formula (a grain mash, yeast, and water), but the grains they use and the way the whiskey is made create huge differences in taste, aroma, color, and more, That’s why you see so many types of whiskeys. Two varieties in particular, though, are particularly regulated: bourbon and scotch.

There are actually US laws that dictate certain criteria a whiskey must meet in order to be sold as bourbon. The primary criteria include:

There are plenty of types and regional varieties of bourbon, but they all meet these criteria if they say “bourbon” on the label. The unique make and blend give bourbon its own signature feel.

Just as bourbon is a regulated type of whiskey from the US, scotch is a Scottish whiskey that is highly regulated and protected too. You might see scotch from brands like Lagavulin, Talisker, Jura, and Oban. For a whiskey to be sold as scotch, it must meet these criteria:

It’s worth noting that Scotland (and many parts of the world) uses the spelling “whisky” instead of “whiskey.”

Scotch, bourbons, and other whiskeys all have their own unique criteria that categorize them and set them apart. One thing’s for sure, though: they all made for a relaxing and delicious drink. To try the best of the best and see the difference for yourself, check out the latest SIP Award winners in a variety of whiskey categories.