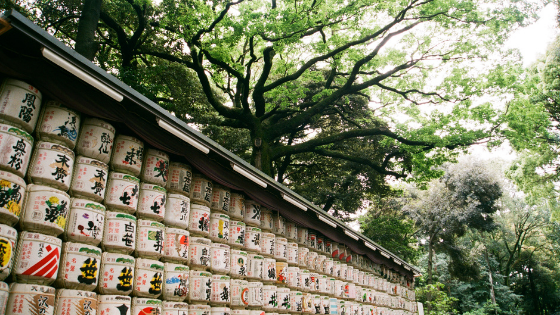 Sake is a long-beloved staple in Japanese cuisine. Made from fermented rice, sake (also called nihonshu) is known for its perfect pairings with just about any type of Japanese dish.

Here’s a quick look at what we know about sake’s early days:

Rice liquor is about as old as Japanese’s reputation for growing rice. Considering the pre-date historical records, most experts estimate the sake recipe is roughly 2,500 years old. The first mention of sake in history books appeared in the third century, where a Chinese history book noted Japan’s taste for sake and its use in mourning the dead.

Fast forward to the 12th century, where history gives more insights into how it was brewed. Shinto shrines and Buddhist temples were common sake-producing grounds creating the techniques that are still in use today.

Brewers used lactic acid fermentation, in which seed mash was used to grow yeast. The lactic acid prevented microbial growth and contamination. During the mashing process, brewers added steamed rice, koji (a mold enzyme), and water in various stages. By the 16th century, sake producing had taken on something of a mass-produced process.

This Japanese staple got a major makeover in the 20th century during WWII, when rice shortages abounded. Brewers had to add pure alcohol and glucose to the seed mash just to maintain supply and demand. Today, the majority produced is still made this way.

How Sake is Served

As Japan’s national beverage, it is now enjoyed all around the world. Typically served in a tall bottle, called a tokkuri, then drunk from a small cup called a sakazuki. Modern sake enthusiasts drop a sakazuki into a glass of beer and quickly drink it, called a sake bomb. This practice mixes the warm soothing taste of sake with the cold, crisp taste of beer for a unique experience.

October 1 is World Sake Day, let’s celebrate with a shot of delicious, warm sake. Now that you know more about its origins, you can better appreciate the complexity of this truly unique, historic beverage.